When working out what game I should work on next I inevitably end up with more ideas than I can work on at one time. Now I’ve selected my next project I’m left with some art and assets (and even some code and working prototypes) from the ideas that have been put on the back burner.

In order to excise these games from my mind while I work on my new project I have decided to post some of the images / videos of the art / prototypes I have been working on so I can focus on what is to come.

Here is a screen capture for an RPG idea I was working on for a while. In this space themed retro RPG you journey around an abandoned space station trying to discover what happened to the crew while battling in one on one turn based battles with the service and battle robots that served and protected the crew. By defeating robots, collecting parts and RAM you can assembling new robots with which to do battle.

This game is clearly influenced by a certain Gameboy title and even sports proper 4 color graphics and a two button menu driven interface. I’d love to make this game one day, if you’d like to play it then let me know in the comments and I’ll think about getting back around to it one day. 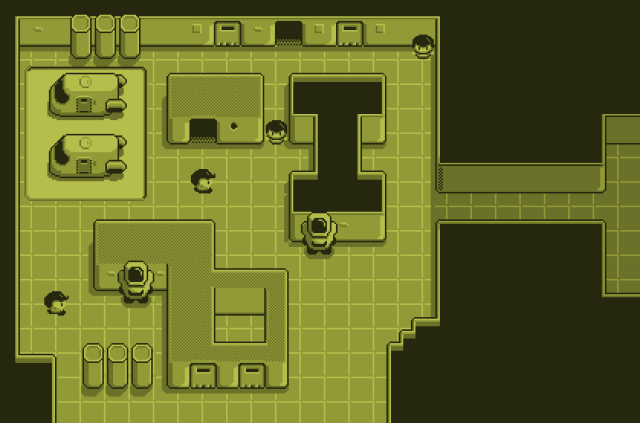 Here is a single screen grab from some art assets I was working on for another platform game. The basic idea here was that as the foreman for a construction company you must assemble multi-tiered robots to transport items around a level and even give you access to higher levels / break down walls and activate switches. As a puzzle platform game it would have required serious effort to get right and make it interesting in the long run. This is all that remains of that idea, a single grab of some of the robots stacked up and walking around the place.

Next is a short video from an infinite runner prototype that I built. The game is playable and has high scores and coins to collect, randomly generating levels and a whole bunch of obstacles. It has a Gameboy aesthetic and uses some classic graphical effects built into a suite of custom shaders I wrote specifically for this purpose. It has had a lot of love put into the feel of it, the way the water washes up and down and clears the footprints left by the player and the splashes left when you run in the ocean. It’s constrained technically to exactly the sprite and tile restrictions of the original Gameboy. It was, however, not that exciting to play as it stands and I didn’t want to release the game on PSM since I’d have to charge for it. If I could have released it for free then I would have finished it off and done so.

If you’d like to play this game let me know in the comments how you’d improve it.